The Master Artist and The Apprentices! 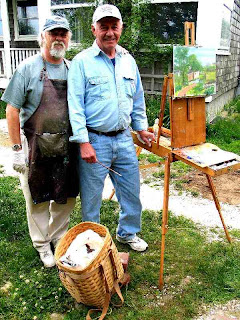 Master Artist Don Mosher, a Century House Nantucket Island artist-in-residence since the late ’80’s selected Tom Heinsohn and Bill Fein to accompany his Charrette early June. Pictured to the left are Don and Bill painting in Sconset. Don’s work has been featured in several national publications including Yankee and American Artist Magazine.

Mosher’s paintings hang in the permanent collections of large corporations, institutions, banks, and private homes throughout the United States and abroad including the Peabody Museum, Portland Art museum, and the State House in Boston. As adept with watercolor as he is with oils, Donald Allen Mosher moves freely between the two and his vivid expressive impressionist interpretations of New England in oils form a delightful counterpoint to his softer, gentler watercolor compositions.